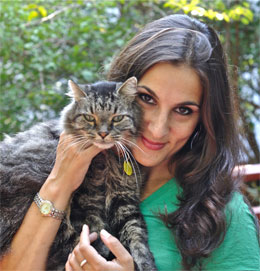 Maya Gupta earned her BA from Columbia University and both her master’s degree and PhD in clinical psychology from the University of Georgia, where her research focused on applying information about the connections between animal cruelty and domestic violence to enhance batterer typologies and to improve the prediction and prevention of violence in all its forms. She has written and trained widely on programmatic innovations such as “safe havens for pets” that assist domestic violence victims in bringing their animals with them to safety. Until December 2013 she was Executive Director of Ahimsa House, a Georgia-based nonprofit organization dedicated to helping the human and animal victims of domestic violence across Georgia reach safety together. She is now Executive Director of the Animals and Society Institute, which explores the connections between people and animals through supporting research on human-animal interactions, training human service professionals on the assessment and treatment of animal abuse, and promoting the integration of scientific knowledge into evidence-based public policy on animal-related issues. She also serves on the Steering Committee of the National Link Coalition, focusing on the animal abuse/interpersonal violence link, on the Animal Cruelty Advisory Council of the Association of Prosecuting Attorneys, and as adjunct faculty in the Anthrozoology program at Canisius College. She previously served on the Board of Directors of the Georgia Coalition Against Domestic Violence. She co-chaired the Organizing Committee for the Section on Human-Animal Interaction in the American Psychological Association, previously served as the section’s Chair, and currently serves as its Training Director. In 2012, she received the Task Force Member of the Year award from the Georgia Commission on Family Violence. She and her husband live north of Atlanta, GA, with seven rescued cats and six rescued chickens.